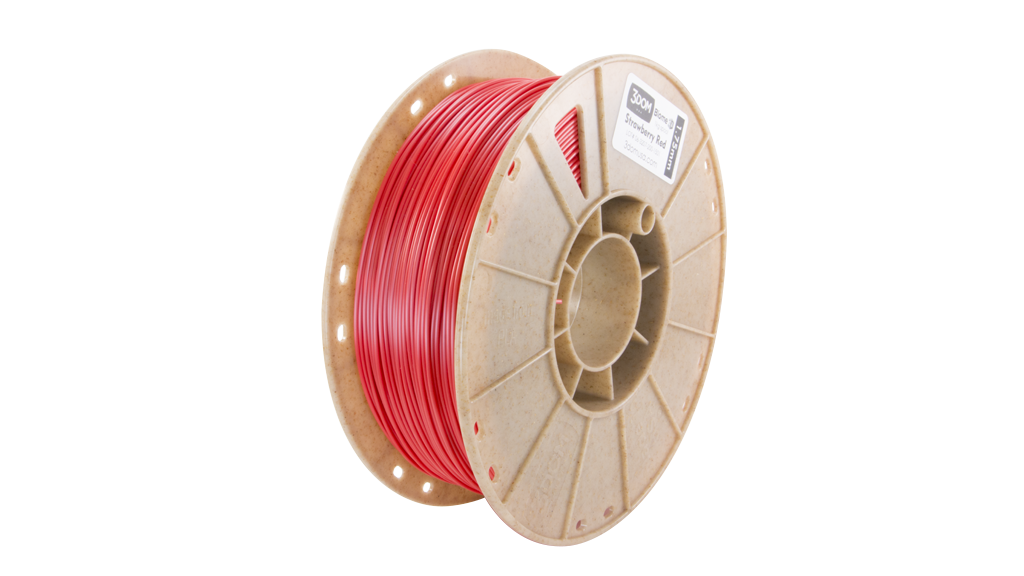 As an engineer, when I use a 3D printer, I use it to print functional parts. Most of the time these parts have to withstand some sort of force or impact in order to function properly. PLA is normally good enough and gets the job done but if I need a tougher, more flexible material, I used to reach for my spool of ABS. Not anymore. Here’s a engineer’s filament review.

When I first saw a spool of Biome3D I noticed that it had a luster and felt very smooth. I was told that it had similar mechanical properties to ABS but without the odor and warping issues. I was intrigued to say the least.

My first few test prints came out well but they stuck to the gaffer’s tape build surface I was using and I couldn’t for the life of me remove the raft from the part. After fiddling with the print settings and going from gaffer’s tape to bare acrylic and finally to painters tape I got my first good print. The final product had a great look and feel, and sure enough, it was much more flexible than the PLA I was used to using and possibly more flexible than ABS.

Biome3D definitely has its uses, and like other plastic and composites, it may not always be the best for every application. A few things to note about Biome3D: it has temperature characteristics more similar to PLA than ABS so it might not be a drop in replacement if you need the extra thermal protection. Also, many people like the ability to use acetone to smooth and adhere ABS parts. Acetone works like this because it is a solvent for ABS, but it won’t work on Biome3D. Unless I am using ABS for one of these two reasons, I will pick Biome3D every time from here on out.

I have yet to print a part in Biome3D that has had more than minor warping issues. It also has great interlayer adhesion – I have yet to have a part delaminate while on the printer of after. This leads to a part that is strong, even in the vertical dimension.

Like I said before, I am an engineer, not an artist. That doesn’t mean that Biome3D can’t be used because of its appearance. Biome3D has one of the best finishes I have seen on a 3D printed part. Once I got the settings dialed in on my printer, my completed parts had a very consistent surface finish and were very smooth. Printing on a heated bed with no raft leads to a very nice bottom surface as well.

One of my responsibilities at Fargo 3D Printing is to do materials testing. I have access to an electromechanical load frame (the same one used by other companies in the plastic industry) where I do tensile testing of the different filaments that we carry. Unlike the rest of the industry that uses injection molded samples for their tests, I 3D print my samples (at 100% infill) to get data that more closely represents how the filament will be used. Based on my testing, I found that Biome3D is 6 times more flexible than PLA and has an impact toughness of nearly 110% of PLA. This is why Biome3D is more desirable in applications where an impact or cyclical forces will be the norm, i.e. cell phone cases, gears, etc. This doesn’t mean that Biome3D is stronger than PLA, and in fact has only about 87% the strength of PLA, but this only matters in applications where a large constant load will be applied to a part which, at least for me, is rarely the case with a printed part.

After I do property testing on a new material, I get to mess around with finding the best print settings for it. I started working on a Makerbot Replicator 2 (i.e. no heated bed). As I alluded to before, Biome3D sticks to itself and other materials very readily. I started with printing on gaffer’s tape which is what we at Fargo 3D Printing use for nearly all of our printers. Biome3D stuck to it extremely well, so well that I couldn’t remove it without tearing up the tape. I moved to a bare acrylic surface which was a bit better than the gaffer’s tape, but I ended up scratching the build plate a lot which could lead to bad prints down the line. I finally settled on good ol’ blue painters tape and it seemed to do the trick. The only issue I had with it was that the tape had a tendency of pulling away from the build surface so I layered blue tape on top of gaffer’s tape and that finally got me to the best prints so far.

When not using a heated bed, I print with a raft. In order to get the raft to be removed from the part while still getting a good bottom surface finish, I had to increase the distance between the raft and the part. In Makerbot’s slicer software, this is the Raft-Model Spacing property. Similar names are used in other slicing software, but it all means the same thing: the distance between the last layer of the raft and the first layer of the part. In Makerbot Desktop, I had to change the property from the default 0.23mm all the way up to 0.27mm before the part would separate.

On our Lulzbot Mini, I print directly on the included PEI build surface with no raft and a bed temperature of around 40 degrees Celsius.

Finally let me talk about print speeds and temps. For the most part, I print at 200 degrees Celsius on any machine but have gotten successful prints anywhere from 180 to 220. I generally leave the print speeds to the default or a standard PLA setting and only change them if the geometry of the part requires fiddling with these settings.

Overall, Biome3D is an easy to print with material that is tough and flexible and has a great surface finish.

— Zach Triplett is Fargo 3D Printing’s in-house engineer. See some of his work like the Overhead Spool Holder and the MakerBot Replicator 5th Gen Spool Holder on Thingiverse.