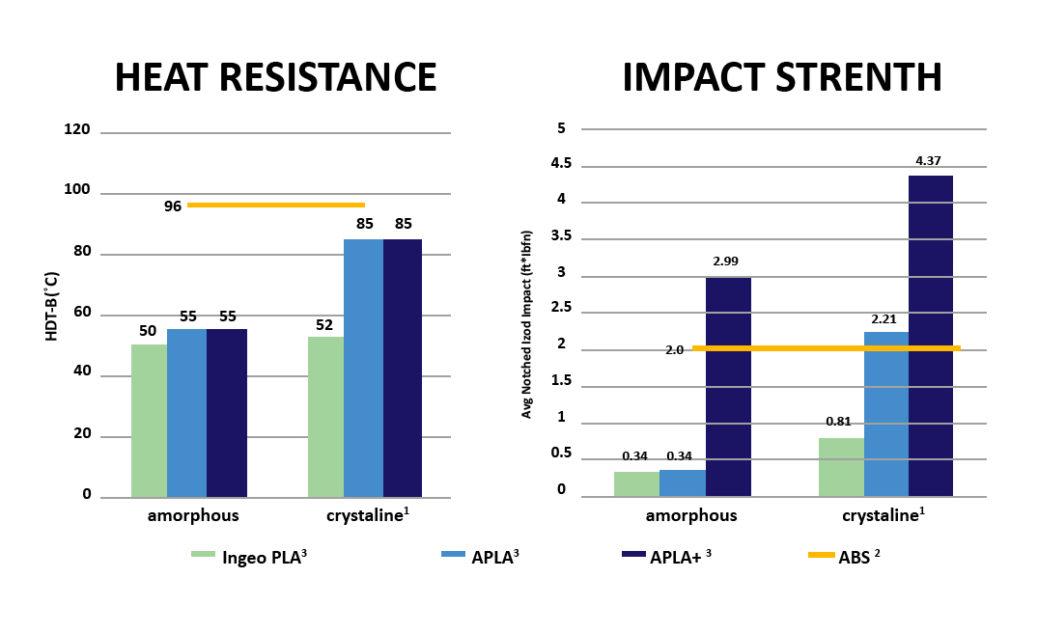 PLA (Polylactic acid) plastic is a common filament used in 3D printers that is strong and somewhat brittle. However, it is not always as strong or as stiff as needed for certain parts. This is where annealing comes in.

In 3D printing, PLA is heated quickly, extruded, and then cooled rapidly. Because plastic is a poor heat conductor, it heats and cools unevenly causing the rapid heating and cooling to create stress within the printed part. This occurs due to the microstructure of the plastic.

Before printing, the structure of the plastic is largely amorphous and unorganized. However, when the plastic is cooled rapidly during the printing process, the microstructure reorganizes itself into a crystalline form with large crystals. It is these crystals that cause the plastic part to be prone to failure. Since the crystals are large, the lines between the crystals can easily snap apart, compromising the structural integrity and the strength of the piece.

Annealing PLA eliminates these weaknesses and increases that strength and stiffness of the printed piece. On the microstructural level, annealing reforms the crystalline structures to even out the areas of high and low stress, which creates fewer weak areas.

By heating the PLA to above its glass transition temperature and below its melting temperature, the large crystals that formed due to the rapid cooling of the piece change into smaller crystals. This increases the number of crystals in the piece which means there are less areas that are prone to failure.

How to Anneal PLA

3D-Fuel recommends a temperature around 80°-130°Celsius (176°-266°F) when annealing their Pro PLA (APLA+). The most common way to do this is by using an oven to heat the plastic. Convective ovens are the best choice since they allow for a more even heating, however, an electric oven also works.

Annealing PLA, when done correctly, results in a stronger, stiffer piece. On average, strength tends to increase by 40% while stiffness tends to increase by 25%. There may also be some shrinkage in the piece. How the piece will shrink depends largely on its geometry. Plan for a shrinkage of up to 5% when annealing. Overall, annealing improves the structural integrity of the piece to allow for broader uses.

Get updates, deals, and more great posts by joining our community of over 6,000!