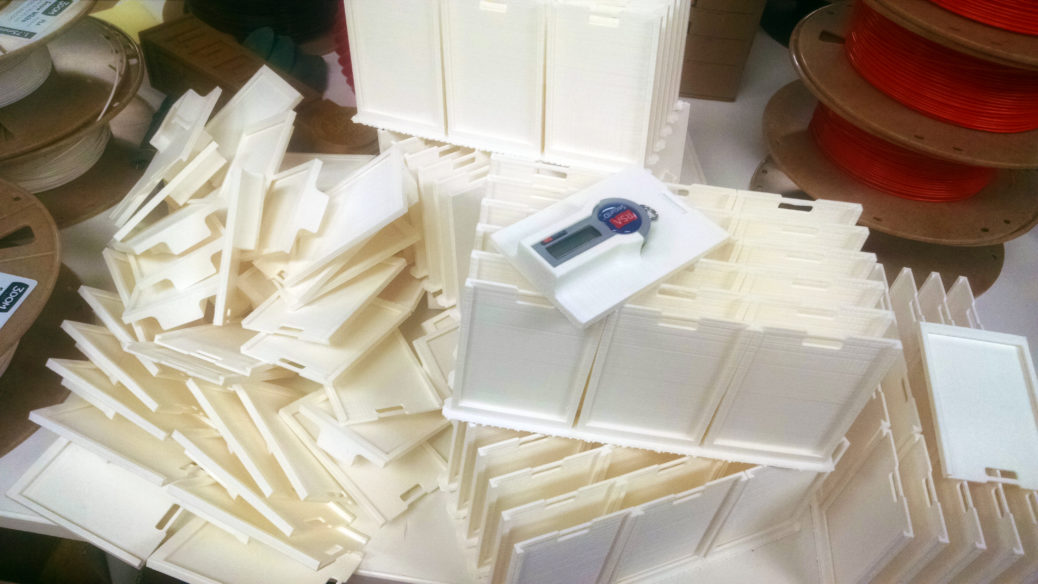 Traditionally, manufacturing parts or products is a long and expensive process. Methods like injection molding can take months and thousands of dollars to produce units and therefore require the production of large numbers of units to become cost efficient.

But what about companies that have a small client base or need a smaller number of units for testing? With the advent of 3D printing, short-run manufacturing has become more and more feasible. Short-run manufacturing, in the simplest terms, is the production of a small or moderate number of units that allows for higher flexibility and a shorter lead time than traditional methods.

The greatest advantage of short-run manufacturing using 3D printers is the ability to be flexible with the design of a product. Changing the design of a product if using 3D printers is a quick and easy process. For example, one company that Fargo 3D Printing has worked with in short-term manufacturing was a call center looking to make badge holders for all their employees and needed approximately 3,000 units.

Their choice to use 3D printing allowed them to change the design for their badge holders halfway through the project. This change took a total of thirty minutes to implement and had no effect on the cost of the project. If they had used traditional methods such as injection molding, this change could have cost upwards of $5,000 and taken over six weeks to implement.

Short-run manufacturing using 3D printers also allows for a shorter lead time than traditional methods. With the injection molding method, the tooling process to create the mold can take anywhere from six to eight weeks.

With the call center client, time was also a key factor. To use the traditional method of injection molding would have taken upwards of six months. Proto Labs, a company that creates prototypes using injection molding with short-run manufacturing, could have completed the project in a week but the price would have exceeded the company’s budget.

By using 3D printers for short-run manufacturing, the project was completed in a couple of months, saving the company nearly four months of time.

It should also be noted that while manufacturing with 3D printing does decrease the lead time, 3D printing does take longer to produce the units themselves. For example, with injection molding a unit could be produced every five seconds. The same unit would take roughly five hours with a 3D printer. This simply highlights that short-run manufacturing is more feasible for a small to moderate quantity of units.

The Costs To Manufacture With 3D Printing

A key factor in any manufacturing, long or short-run, is the cost. With injection molding, the tooling for the mold has a price range upwards of $20,000 for something as small as an iPhone case. And, as we saw earlier, a change in the design can result in an additional fee of $5,000 or more. This showcases the fact that traditional methods favor a high quantity of products.

A good way to calculate the price of a 3D printed unit is this formula: Unit Cost = Unit weight x (Material Cost/Material Weight). This shows again that short-run manufacturing is a great option for a lower quantity of units. For example, the entire badge holder project, including the design change, would have cost ten to twenty percent more if they had decided to use a traditional injection molding method.

Another example is Superior Industries, a company that makes industrial conveyor belts. Superior needed 100 model pulleys made for use at trade shows. Originally, the company had decided to make each pulley individually using sheet metal fabrication. However, Fargo 3D Printing was able to 3D print the model pulleys, which drastically reduced the company’s overall costs.

Recently, Ultimaker used bridge manufacturing to ensure that the launch date of their new printer, the Ultimaker 3, was met. The company had made a significant change to the spool holder to improve the efficiency of the printer. However, due to this change, the printer’s release date would have been postponed if the company had used injection molding to make these new parts. Instead, they 3D printed the spool holder for the first printers so that the release date could remain the same.

Parts produced by 3D printers may not perform in the same way as parts produced using traditional injection molding. However, there are significant improvements being made in the field of desktop 3D printing. The Ultimaker 3, which was mentioned earlier, can print with two different materials, the build material and the support material. This allows the printer to use materials like engineering-grade carbon fiber which can increase the functionality and the structural integrity of the 3D printed unit and enables 3D printed parts to compete with injection molded parts.

Currently, short-run manufacturing is the most feasible option for companies or individuals looking to produce a small to moderate number of units. It is a cost and time effective option between individual tooling and injection molding that allows for greater flexibility while still being able to compete with more traditional methods on terms of price.

If you are looking to manufacture a product, but have found other methods to be prohibitively expensive, consider 3D printing it instead. Get in touch today.